It all started by life-long motor-cyclist Steady Eddy Hines of Mayland as an idea to get local Motor-Cyclists together.  Eddy had contacts within BBC Essex Radio and the local papers who put his idea out to the public.

The response was very good so a meeting was arranged at The Henry Samuel Hall, Mayland on Thursday, 24th March 1994.  Eddy’s Wife and Daughter (Phyllis and Debbie) arranged tea and biscuits.  80 people turned up so another meeting was arranged two weeks on.  At this second meeting it was decided to call it The Dengie 100 Motor-Cycle Club thereafter meeting every 2 weeks on a Thursday evening.

In August 1994 we moved to Latchingdon Football Club and later to the Star Inn Pub at Steeple.

After 12 years as Chairman Eddy stepped down and Len Reeve took the Chair.  Over the years we had a succession of Chairmen, present Chairman being Paul Carden and now meet at The Round Bush Pub, Mundon, CM9 6NN every 2nd and 4th Thursday.

Each month we had a newsletter.  We did weekend runs to Clacton, Southend etc., camping at Reedham Ferry, Norfolk and The Essex Air Ambulance run.

One of our main highlights was our Easter Egg run.  For this we were sponsored by Tesco’s.  We rode all round Essex, Suffolk and Norfolk visiting Tesco Stores collecting Easter Eggs which we gave out to children at Homestart in Maldon and Mentally Handicapped Children in Chelmsford.

We also visited the Belgium War Graves, staying at a Hotel in Ypres (organised by Len Reeve).

We have sponsored dogs for the Blind (naming one Harley); a disabled Lady horse-rider to compete in competitions and a disabled boy from Southminster.

So overall we haven’t done too bad.

Eddy has at 80 years old given up motor-bikes but having had motor-bikes since 1955 it’s still in his blood. 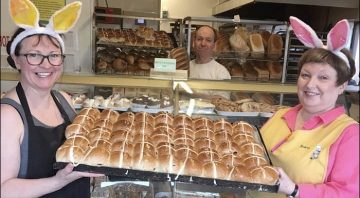